Need help convincing your significant other to go on more holidays? Or for your boss to approve another annual leave request? Well, you’re in luck!

Our latest research, The Wotif Travel Yourself Better Report, has found that although 96% of Australian workers report feeling recharged to some extent after a holiday, the feeling is gone by hump day (3.2 days). Major sad face.

To maximise that post-holiday feeling, the report suggests we don’t need to rely on a long trip to feel refreshed, with multiple mini-breaks the key to holiday success. Which is great news for those of us who are rubbish at saving, planning and packing for longer more complicated holidays 😉

With spring in full bloom, now’s the perfect time to book in a long weekend away. Why Spring? The inaugural report reveals Australian workers who took a Spring mini-break within Australia felt 7% more recharged than the national average.

The research also reminds us of the importance of taking a holiday for our work selves, with:

So there you go, the stats don’t lie. You need a mini-break, no excuse needed! A Summer baby…catch her running, swimming or having sundowners by the Sydney seaside

10 of Australia’s most epic aerial pics

13 amazing natural wonders around Oz to swoon over

How much of Australia have you REALLY seen?

QUIZ: Can you master our trickiest Aussie travel trivia yet?

Fun for the kids: Download the Wotif Colouring Book! 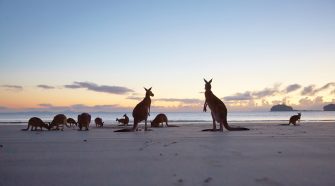